When I started making wine I read a lot about it. And I found recipes which I thought were really weird. People make wine from almost everything. I once even saw a recipe that contains chocolate! Since I was just trying to make a normal good wine I did not pay much attention to these crazy ideas.

However, one of them stuck and I wanted to try it for a long time: Parsley wine. Especially when I found out that parsley is apparently very healthy.

So I looked for a recipe and I found that there are 2 kinds. The first is very simple: Buy a bottle of white wine and add some parsley. If you want your wine to be healthier and tastier I think that this is a good option. If you are a wine maker you would choose for the second option: Create your own parsley wine!

There are plenty of recipes on the internet but I found that I did not have enough parsley in my garden so I made my own version. Here is my very simple recipe for 5 liters: 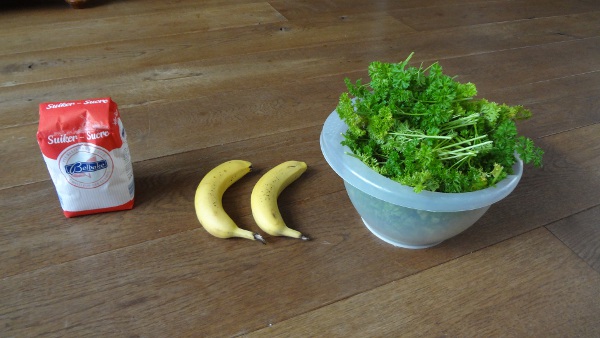 The recipe was completely new to me but I had some ideas about it. It should be a light, fresh wine that perhaps could be drunk rather quick.

It is rather safe to assume that there is not too much sugar in parsly. (Let’s say none.) 1 kg sugar in 5L gives you approximately 11 % alcohol. In the bananas is some sugar but that probably would not even produce 1% alcohol. Since some alcohol would evaporate in the demijohn I did not include the bananas in the calculation.

I assumed that there also would not be much acid (close to none) in parsly so I added 6 gm/L citric acid. Citric acid is stronger than tartaric acid so the acidity would be around 7.

After 6 months I tried a bottle and I was not sure about it. It looked great but it was a bit harsh and the aroma was a bit green, flowery. It was not ready and could be better in the future. At least that was what I hoped. 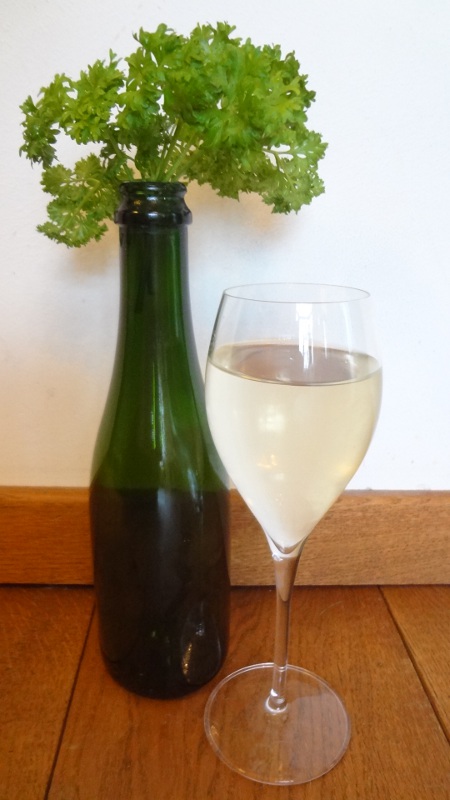 And luckily I was right. After 1 year it has become very nice. Of course it is not like a regular wine from the supermarket but it is not too weird. It is a very pale wine that has become very clear. It looks good. The combination of parsley and citric acid makes it very fresh. Maybe some people will find it too acidic.

The parsley creates an aroma of flowers and has a great impact on the taste. Recipes that I found on the web mention a lot more parsley but I think that you can also make this wine with only 250 gm for 5 liters.

In conclusion I would say that this was a very nice first attempt and I will definitely try it again. However I would change some details. I would use less parsley. I think that 250 gm would be enough for 5 liters wine. It tastes nice but it is not very subtle. I would also use a little less citric acid. Citric acid is the right choice but the combination with parsley gives the impression of a more acidic wine. Next time I will try 24 gm.

This entry was posted in Şarap. Bookmark the permalink.